Over the last couple of years, at the October Club Nights in Vancouver, Rob Murray and a few other visiting cruisers currently stationed in El Salvador, have passed a hat to collect donations to support the ‘Just Water‘ charity and the work that they do in Isla Cordoncillo, El Salvador.

Bill and Jean, who started the ‘Just Water‘ Charity, wrote the following to explain what they do with the money they have received from BCA, in light of the last two years of donations (approximately $1,500.00 CAD ):

In 2012 we felt that the “Cruisers Rally to El Salvador” needed a social responsibility component, so we started our project named “Just Water”.  Initially our goal was to help the 68 or so families on Isla Cordoncillo obtain fresh water.  The Island has never had fresh water (or any other services for that matter).  Any water they needed was transported from across the estuary by boat.  There were some rustic attempts at catching water during the rainy season, but most lacked storage facilities.  Even then, the water was suspect and there were numerous accounts of people getting sick from lack of clean water.

Our first project was to provide each family with a ceramic water filter system. A short time later, we built a 2,000 liter cistern to collect rain water for each family.  Over the years, our goals have changed after realizing that we could only do so much.  Finding wells and running pipes from across the estuary were government-size projects and well beyond our abilities.  We expanded our goals to include helping raise the standard of living on the Island.  We worked with the U.S. Embassy, Israeli Chamber of Commerce, Salvador Rotary, and local Salvadorians who were interested in helping us.  Some other projects that we completed were providing eco stoves, a second round of water filters, a mosquito abatement program, rebuilding of the Island seawall, and Island clean up crews. 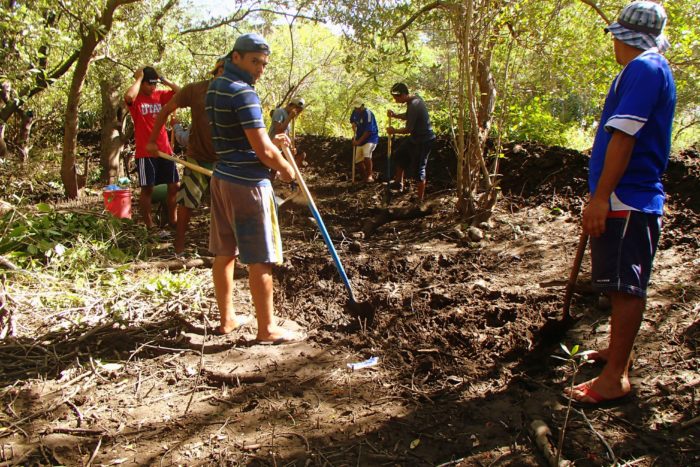 We are the first responders during emergencies, providing the only basic medical care on the Island.  During a flood in 2015, caused by a broken seawall, everyone lost or ruined all their possessions.  We, along with some other helpful expats, fed the families three meals per day for three days, distributed clothing and mattresses, and gave each family emergency food packs. 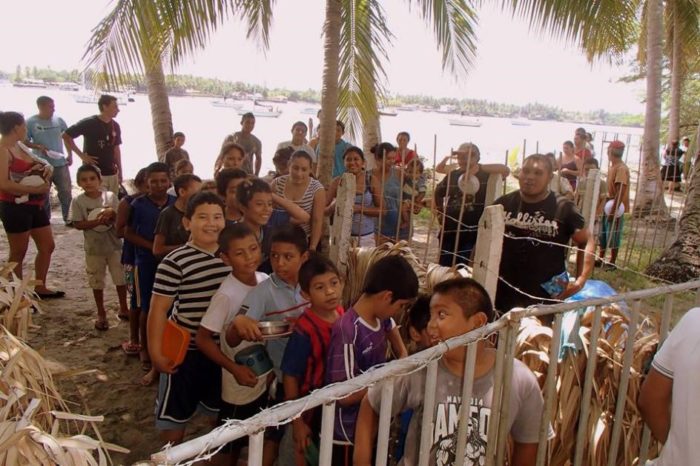 Feeding people during the 2015 flood.

Our on-going mosquito abatement project, which began in 2015, has eliminated the dangerous tiger mosquito from the Island.  The commercial machine was donated by a cruiser and we do the maintenance and buy the needed chemicals.  No mosquito born diseases have been reported since the beginning of the project.

Although we have a policy that says all our projects have to include the entire Island, we have made exceptions.  Even among the poor there are people who are almost desperate.  Single mothers, single old men and women, disabled, and people who have almost no income.  We periodically provide them with food packets or other items they may need.  We work with the local ADESCO, a sort of de-facto Island government, to identify those in need.

Our personal story is not much.  We retired on this Island after almost 15 years of cruising and dedicated part of our lives to helping our neighbors.  We spend our days charging cell phones, patching soccer balls, fixing cuts and scrapes, loaning tools, and making endless copies for people on our printer.  We try to help whenever we can.  Anyone in our situation would do the same thing.

Here are some testimonies from BCA cruisers who have witnessed first hand the work that the Just Water charity is doing:

From the crew on Avant:

“Having seen first hand the work Bill and Jean do on the isla, we were moved to start passing the hat last year when a tropical storm dumped over six inches of rain on the village overnight, causing flooding, while at the same time preventing the fishermen from going out to fish, cutting off their income. We knew that Bill and Jean would help them bridge the gap in income and recover from the flooding.

The standard of living is very poor here – there is no water or possibility of wells for water, no electricity, no roads or road access, and villagers cook over wood fires. Homes are simple stick construction with galvanized panels for walls and roofs, with dirt floors. Seeing the villagers travel by paddling their Cayuga (dugout canoe) to take their children to school and fetch water from the mainland showed us how fortunate we are and how lucky we are to be able to help.”

From the crew on Anduril:

“Jean and Bill’s work on isla Cordoncillo is the best kind of charity organization because it is both embedded and direct: they live on the island and see daily what are the most pressing needs, they can act instantly to those needs and they have no overheads, so their spending is 100% efficient. Not to mention they are super fun to be around.”

From the crew on Illusion:

“Bill and Jean’s work on Cordoncillo Island is very broad, but particularly important regarding safe drinking water. They understand that the long-term success of projects requires a need for ownership – and most of their projects are structured that way. There is so little money on the island, that most solutions involve group efforts to build, distribute or install projects. Even when they offer a bit of food to the desperately hungry, it’s done in an almost casual way, as if they have an extra bag of beans, flour, coffee. They seem to find a natural balance of directing self-improvement in living standards and contributing in a significant way.

The island is an amazing place, they embraced our 4 year old son, offering him to attend their small school. We tried to return their warmth and openness by helping Bill & Jean with the various projects on the island and bringing cruisers to watch/participate in their Wed afternoon soccer practices. So, of the 12 months that we’ve lived on our boat in the estuary, the last 6 months living next to, and partly integrating with, the island have been the most satisfying of all the places we’ve traveled.

The “Just Water” charity that Bill and Jean have created is well worth supporting. Cordoncillo Island is such a small part of the world, but it is a needy place with a worthy, reliable charity. I’ve seen how they fund things, and I trust them; we regularly send money to support their work.”

Next Article: Saying Goodbye Is Hard To Do