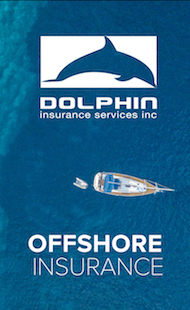 Did I get your attention with ‘inexpensive’?… read on to learn why else you might want to build a new VHF or AIS antenna.

You likely already have one antenna, which you use with your regular VHF radio. You may have considered getting a second antenna for use as a backup or with an AIS system. This article describes how to construct your own VHF antenna, using about $10 in parts plus a few hours of labour, and gives some straightforward mounting ideas.

The advantages of having a backup are obvious (a frigate bird removed our masthead antenna at Tabuaeran), but it may be less obvious why separate antennas for VHF voice and AIS are useful. After all, one can buy antenna splitters for sharing a single antenna between your VHF radio and your AIS unit. Some AIS units even include a built-in splitter. However, a separate antenna gives you:

So let’s assume you are convinced to get a second VHF/AIS antenna. You can purchase a traditional whip antenna, such as the Shakespeare model 5215 ($85), or you can build your own, following the instructions in this article and it will perform as well as a commercial product. Let’s start with a sprinkling of radio theory to explain the design. You can skip this part if you want, and just hop down to the construction portion. I have included some definitions at the end of this article to help with terminology.

These are the principles upon which an antenna functions:

Antennas are most efficient at sending out and capturing radio waves when the antenna’s length is matched to specific fractions of the radio wave’s length. For marine VHF (frequencies between 156 MHz to 163 MHz), a formula tells us the wavelength is about 1.91 metres.

Many antenna designs exist, each emphasizing some important characteristic such as gain, directivity, polarization, bandwidth, and physical size. A common VHF masthead antenna (such as the Shakespeare mentioned earlier) has a half-wavelength vertical element, which is about 1.91 m / 2 = 96 cm = 38 inches long. In practice, it will be slightly shorter due to physical properties of the antenna’s conductor. Another commonly seen VHF antenna is about 8 feet long and usually mounted on the stern rail; it has more gain than the shorter masthead antenna but is also more directional (i.e. one loses signal strength when heeled over).

The antenna we’ll be building will be a half-wave dipole, featuring simple construction, good balance between gain and directionality, and easy mounting.

Inside the rope’s hollow core are threaded two lengths of wire. Constructing it is straightforward:

For materials, you will need: 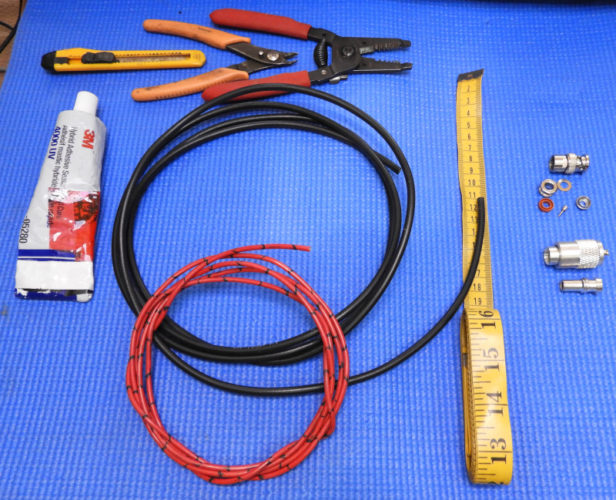 First decide on where you want to install the antenna (see the following Mounting section for some ideas). This affects how long you make the antenna’s coax tail. You can make it long enough to reach your radio or AIS unit in one unbroken piece, but this might make installation difficult. Instead, I recommend a shorter tail that attaches to a longer run of coax inside the mast. Our antenna has a 1 metre tail, ending in a BNC connector. This connector attaches near the foredeck light to the coax inside our mast. If you aren’t quite decided on where to mount it yet, you can cut the coax longer than you’ll need, and trim it later when you put the connector on.

Now we’ll construct the antenna from one end of the coax, before inserting it into the rope. Here is the procedure, with photos corresponding to the numbered steps: 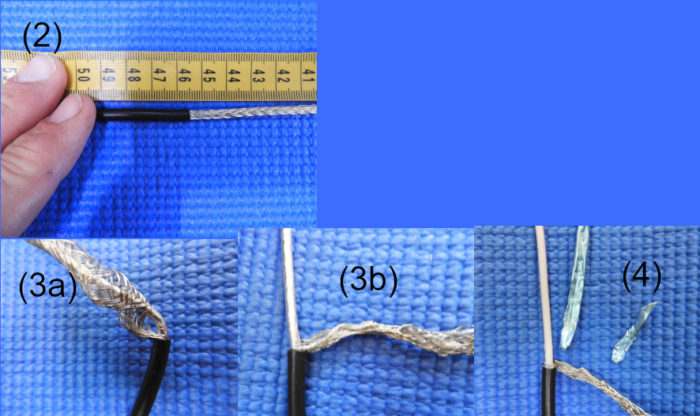 Here’s the fun part where the two legs of the antenna are fed into the rope, leaving the tail protruding from the midpoint. Pretty much any length of rope with a hollow core will do, provided the antenna legs fit inside, and there’s enough rope left over for tying the antenna straight between two mounting points. I’ll describe one way of doing this – I’m sure you can imagine other methods. 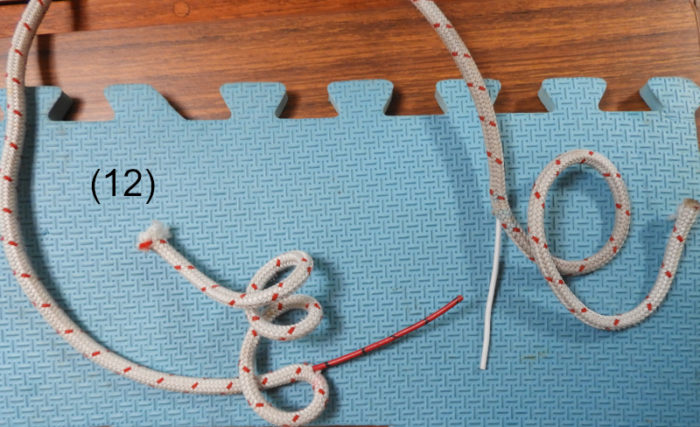 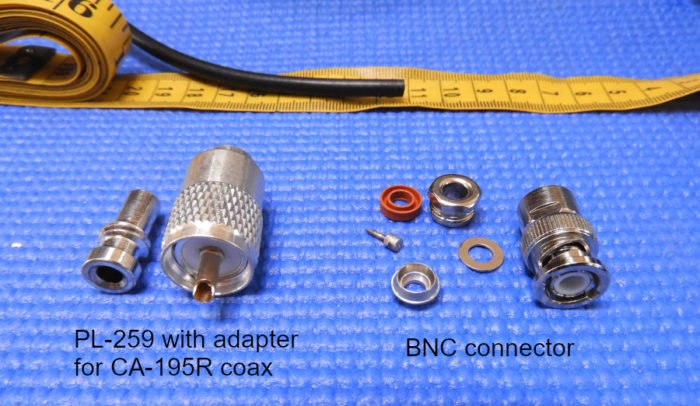 That’s it! Your antenna is finished – pat yourself on the back!

Before going to the effort of mounting your new antenna, spend a few moments testing it. The first test is to use an ohm meter to measure resistance between the two contacts of the connector: it should read as an open circuit. If not, there is most likely a short in the connector, or possibly between the coax braid and centre conductor at the T-junction.

The second test is to connect the antenna to a VHF radio or AIS system and check whether you get reception. Once this works, the final test is to try transmitting, but keep people and sensitive electronics several metres away to reduce RF exposure.

When mounting your antenna, keep in mind these considerations: higher up gives better range; avoiding proximity to other antennas reduces interference; and a shorter coax run to your radio retains more of the wanted signals. You should also keep the antenna legs approximately vertical and spaced away from metal objects, to keep the performance omni-directional in the horizontal plane. Incorporating your antenna inside the rope makes it easy to tie between two mounting points. We mounted ours between a spreader and a shroud, as shown here. 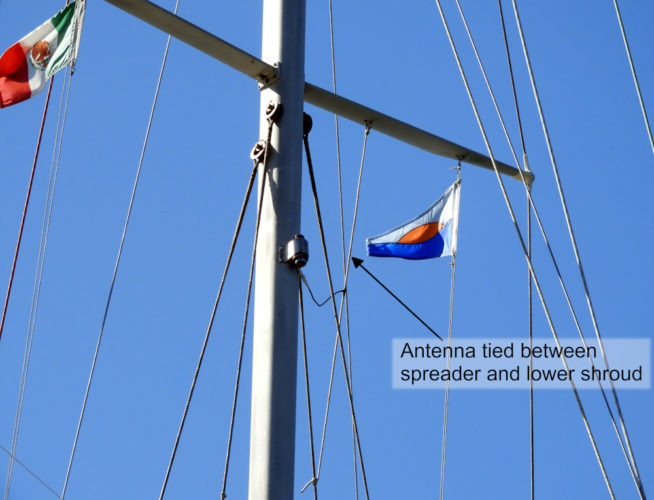 The connection between the antenna tail and the coax running back to your radio should be waterproofed. Wrapping a few layers of self-amalgamating tape around the connectors will do the trick.

How does this antenna perform? Quite well, as measured both with an antenna analyser and in real-world results.

An antenna analyser (Array Solutions AIM-4170D) measures the resonant frequency of this antenna as 162.02 MHz, which nicely corresponds with the frequencies used by AIS (161.975 MHz and 162.025 MHz). Additional results are shown in this table:

To put these figures into perspective, a 50-foot length of RG-58 cable has about 50% power loss. So, we expect this homemade antenna to perform slightly better than the commercial one for AIS use, and slightly less well at VHF channel 16, but the differences will likely be obscured by losses in the cables leading to the antennas.

For those who are interested, here is the analyser’s plot for our antenna between 130 MHz and 180 MHz.

In real-world use, our homemade antenna works great at picking up AIS signals when attached to an SR-161 AIS receiver. Here’s a screenshot from our chartplotter, while we were near Bahía Concepción in the Sea of Cortez, showing AIS targets up and down the Baja coast. Note the two targets south of Puerto Vallarta, over 500 nautical miles away! But wait, you say, VHF is supposed to be line-of-sight… This long-distance reception demonstrates the phenomenon of atmospheric ducting, an interesting topic in itself. Our antenna can’t claim all the credit, but certainly works well at nearer targets too. 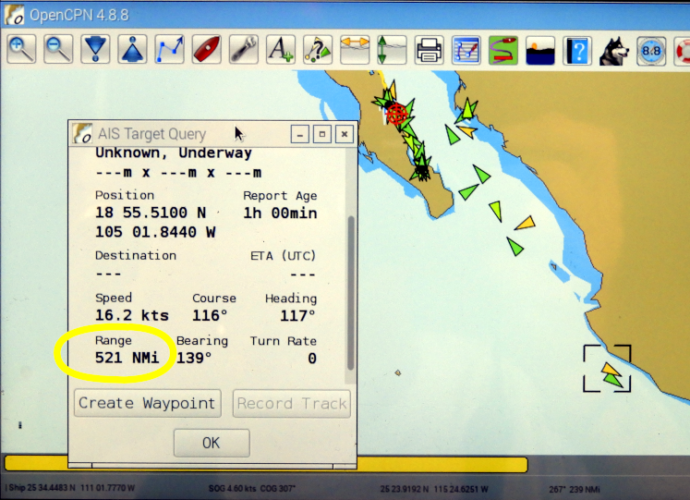 I hope this article has been useful and inspires you to have fun making and playing with antennas. If you have any questions or comments, I’ll be happy to hear from you!

Next Article: All About Sails

From 2004-2006 Barb and Bjarne sailed the South Pacific on Freya, their 30' Hunter-Vogel. Upon returning to Victoria they have participated in the VI Watch and supported fleet members preparing to go offshore. After some wonderful cruising in local waters they headed south again in 2015. Hoku Pa'a, their Niagara 35, is ship-shape again after her unfortunate encounter with Hurricane Newton, and Barb and Bjarne are now happily exploring the Sea of Cortez. 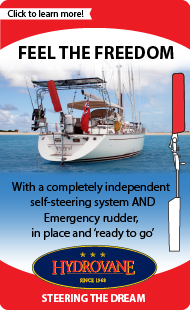