After spending the past three years cruising in relatively remote regions, we decided to embark on a tour of the numerous regattas that the Caribbean offers up each sailing season.  In 2014, we had brought Curare up along the Brazil coast, through Suriname to Barbados and then Martinique, before turning back south to store her in Trinidad for the hurricane season.  While in Trinidad, we took advantage of the skilled labour force and ready supply of boat equipment to undertake an extensive refit on Curare.  So when we launched in December, 2014, the old girl, now celebrating her 40th birthday, was in great shape.  We gave her a facelift by removing the entire gelcoat from the hull and repainting in Awlgrip.  The cabin tops and cockpit were repainted as well.  Numerous other minor repairs, upgrades and maintenance were completed, since this was the first time since Panama that we had access to such a great selection of boat parts.

Distances in the Eastern Caribbean are seemingly small.  It is only 450 miles from Trinidad in the south to the Virgin Islands in the north; a few days sail if we set our minds to it.  But we wanted to see what the cruising aspects of this well-trodden area were like.  With the trade winds blowing a steady 20 to 25 knots out of the east, you would think it would be an easy beam reach sailing to traverse the north – south oriented islands of the Greater Antilles.  Not so, as the southern half, known as the Windward Islands, require winds south of east to make comfortable northing.  Given the steady westerly flowing current, any winds north of 090T make for a heavy beat.  Guidebooks and local lore tell of numerous ways to deal with this; like waiting for a full moon, going with the currents or mostly just waiting for favourable weather.  We didn’t do any of that and beat our way north in 25 knots NE winds and 2 meter seas.  By the end of the 95 mile passage from Chagauramas to Grenada, our spotlessly clean boat was in need of a major salt removal cleanup.

Grenada hosts one of the largest cruiser-friendly communities in the Eastern Caribbean, with several popular anchorages and a friendly morning cruisers Net to fill everyone in on the endless gatherings, swap meets, grocery runs, etc.  It is also an Island that is very easy to get around on, with an efficient mini-taxi (bus) service.  After enjoying a quiet Christmas potluck with other cruisers in St. David’s Bay, (one couple we had last seen at Easter Island!) we decided to get underway and make tracks north.

The Caribbean Compass is a locally produced, (Bequia Island) monthly newspaper that contains informative details on all of the Eastern Caribbean activities.  Nearly every day throughout the cruising season there is a carnival, music festival, regatta or yacht race to attend somewhere in the Caribbean.  We couldn’t do it all, so had to make crucial decisions of what we wanted to see and where.  On our agenda for the 2014/2015 cruising season was an aggressive, perhaps optimistic, list of regattas that we hoped to attend.  The ones we were most interested in were the RORC 600 Caribbean race and festivities; the St. Maarten Heineken Regatta; the St. Bart’s Bucket, and the grand daddy of all regattas, the Antigua Classic Yacht Regatta.  Fortunately, the races and regattas were spaced out over several months, allowing participants and spectators to travel between venues.  Several other big name events were scheduled throughout the region; but time, distances and getting overwhelmed by all of the activities kept us from hitting them all. A large majority of sailors arrive in the Eastern Caribbean islands from either the north (US mainland) or the east (European vessels crossing the Atlantic).  Hurricane season officially ends November 30, but most boats start arriving earlier in the month. ARC participants coming from the Canary or Cape Verde Islands arrive in St. Lucia early in December and with an influx of over 200 boats, this is a significant event.  As we moved north up the island chain, we encountered more and more of the ARC participants proudly flying their colourful burgees as a badge of honour, or perhaps to attract other participants. We were in Falmouth Harbour, Antigua for the start of the Royal Ocean Racing Club (RORC) Caribbean 600 race, which had a hundred or more very serious boats competing in the 600 mile race, that winds among the neighbouring Leeward Islands.  We departed the day after the start for an overnight sail to Saint Maarten, and encountered several of the front runners blasting along at 18 knots or more; and later that night, a few others moving somewhat slower.  One boat came so close to us on a reciprocal course that we had to take evasive action, in spite of being on starboard tack, nav lights on and our AIS transceiver broadcasting our location.  Even after hailing the sailboat on the VHF using their boat name, as they also had AIS, they did not respond until the last second.  A very close call! After the race: Heineken Cup

We arrived in St. Maarten for the very popular and famous Heineken Regatta, which this year was held March 5 to 8.  Up to 300 boats participate in this three-day event, with many people flying in to charter a boat for the races.  It’s a great venue, with relatively flat water and generally a stiff trade wind to move everyone around the course, which changes each day.  As most boats are located within Simpson Lagoon, the battle to get out with the first bridge opening in the morning is nearly as entertaining as watching the boats return at the end of the day.  The St. Maarten Yacht Club facilities are located right on the channel at the entrance to the lagoon, and a group of volunteers rate the costumes and antics of the returning race boat crews.  The parties held each night of the regatta were incredible, with top name bands flown in to entertain all of the racers.  And with the beer flowing so freely, it’s a wonder how Heineken managed to produce so much amber liquid! Get out of our way, 1 billion dollars of yachts!

Next up on our Caribbean regatta tour was the St. Bart’s Bucket. This is a showcase for some of the wealthiest in the world to race their multi-million dollar yachts against each other, and take home the bragging rights and a beat-up silver bucket.  Participation in the regatta is by invitation only, with yachts ranging from the 55 meter Adela, built in 1903, to the modern styled 33 meter Inoui and 46 meter Elfje, to Ron Holland’s latest Perini Navi, the 60 meter Seahawk. There were two J Class boats participating this year: Rainbow and Hanuman; along with several other superb yachts, for a total fleet of 36 yachts divided into four divisions. The amount of teak around Gustavia Harbour represented a whole forest!  For the first time, the Bucket Rule that provided a means for handicapping these dissimilar vessels was tossed out, in favour of the Offshore Racing Council’s Superyacht rule to more fairly provide ratings. These rules are necessary because these yachts are aggressively raced.  At the skippers meeting one morning, we overheard the race committee chairman state that yachts should not get within 45 meters of each other; but he did not specify how much clearance a 55 meter yacht had to give a 60 meter yacht.  Do you measure from the bow, the stern? We took Curare out amongst the racers and with our diminutive 3.5 meter beam, we could not have fit between some of the racing yachts.  These boats are huge – the boomvang for the yacht A Better Place weighed as much as Curare! Famous America Cup helmsmen and tacticians were crewing on some of the most serious boats, competing for the Bucket and the  night events were just as competitive. Each night, we watched truckloads of Grey Goose, champagne and beer get loaded onto the mega yachts that lined the inner harbour. Yes we mean truck loads each night!  The social scene was equally entertaining. With St. Bart’s already an exclusive hangout for the rich and famous, each afternoon and into the night the RAF’s would come out in their finery, to be seen and strut around the $15+ million dollar yachts.  Quite a spectacular event and one we are not soon to forget. The last regatta that we wanted to experience during our cruising season in the Caribbean was the Antigua Classic Yacht Regatta, held April 16 to 21 in Falmouth and English Harbours, Antigua.  2015 marked the 28th anniversary of this event, that brings the world’s most elegant and beautifully constructed classic yachts together for five days of fun, but serious racing, right off the entrance to English Harbour. The start gun at Antigua Classic

The fleet of up to 60 yachts is divided into five classes for the start.  There is a single handed race the first day, followed by four separate courses the following days.  Most yachts are provided space at the Antigua Yacht Club docks, where guests are permitted to wander around the docks and marvel at these incredibly elegant sculptures of craftsmanship.  Geoff managed to secure a spot on board the committee boat as a steward, serving the Race Committee tea, cake and sandwiches throughout the day.  He also managed to be on the aft deck of the committee boat, the 90 foot tug the Flying Buzzard, when each of the yachts came racing across the finish line. A very close finish in Antigua

It was incredible to witness these massive and well-sailed yachts, hurtling towards a solid block of riveted steel at well over 12 knots, skimming past her transom with meters to spare. The wrap-up party, after the final day of racing was complete, was also a superbly organized event and the awards ceremony commemorated some of the most well-known classic yachts in the world. Also included were several of the lesser known, such as Sally B, a gaff rigged, 12 meter schooner that had arrived from England the day before the races started, and left for home the following day. It was a spectacular regatta, well organized by the volunteers of the Antigua Yacht Club.

With our season of participating in Caribbean regattas behind us, we sailed down to Tobago early in May. There, we found a peaceful, quiet little bay to relax and unwind for a couple of weeks before taking Curare down to Trinidad and her haven for the 2015 hurricane season.

Next Article: My First Offshore Trip 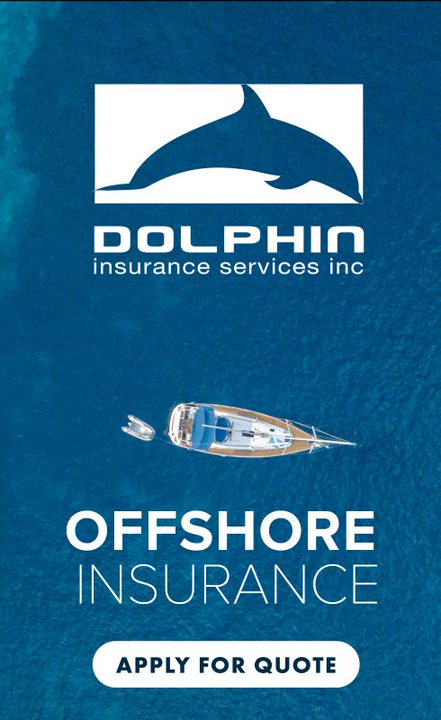