I grew up on the Kootenay Lake, not so much on the water but near enough so that living near water is a necessity for me. In the early years of our life together my husband David and I talked increasingly often about sailing. He had sailed in Sea Cadets and in the Canadian Navy. Up until 1980 when we bought our first sailboat I had no sailing experience.

Our first boat was a 1973, 24 foot Bayliner Buccaneer. As 24 foot sailboats go it was not a fast boat (except when running down wind), but it was roomier than most. The boat had a shoal keel, high free board and was very stable. Our two sons were 1 1/2 and 3 1/2 years old at the time. It was a wonderful choice of boats for my lack of experience and our sons ages. We spent countless hours on both the West Arm of Kootenay Lake and The Main Lake, as the larger body is called. I think it was a dreamlike life being able to “camp” along the shores of Kootenay Lake, learning to sail and learning to live in close quarters. In the 1970’s and 1980’s there were numerous sailboats cruising Kootenay Lake, many of these boats had families aboard. Interestingly boats as large as 30 feet were pretty rare on the lake at that point. Most people had boats in the 24 foot range with a few 26 or 27. Our 24 footer allowed us a lot of space, despite the food storage being an icebox with a cooler backup, the cooking being a two burner pressure alcohol “stove” and the toilet being a porta potty. We often had other families aboard. We became sometimes referred to as “The Cast of Thousands”. One of the luxuries of fresh water sailing is having a swim to cool off and clean up. Salt water is not quite so refreshing, if you are accustomed to fresh water. 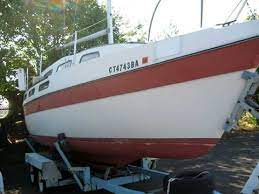 Not everyone who has sailed on fresh water interior lakes has sailed coastal/tidal waters. And the reverse is true, not everyone who has sailed coastal/tidal waters has sailed freshwater lakes. Kootenay Lake drains south into the USA, and along the way there are numerous dams which produce hydro electric power and manage water levels downstream. There is a significant effort to manage the flow of spring runoff in particular on Kootenay Lake to reduce flooding to the south. The result of this is that there is what I like to call a “yearly tide”. Pre-spring runoff, the levels of the dams and Kootenay Lake are allowed to drop significantly to allow for collection and control of the runoff. For a couple of months of the biggest snow melt the level of the lake then rises significantly. Some years the rise causes flooding along the shores. Anyone interested can check the current or historical lake levels on the Fortis BC site. The lake is very susceptible to shifting of sand. The minimal “charts” available for the lake are therefore not only old but inaccurate due to constant change. This, of course, is a challenge to navigation.

Along the main lake and the west arm there are numerous steep and narrow drainages. Through these drainages there can be erratic and severe sustained winds or gusts. The west arm is narrow at the best of times and in the low waters of spring it is very narrow. A sailboat may be heading along with a relatively small wind propelling it and upon crossing one of these draws can be smacked with a much harder wind from a totally different direction. This happens in coast sailing as well, the biggest difference being that in lake or river sailing there is often little room to maneuver to correct sails and perhaps alter course while avoiding the sand bar or worse, the rocks nearby.

We had many adventures on that 24 foot boat, not all of them entirely pleasant. The boat had a 10hp outboard motor, which was more than adequate when it worked. Unfortunately, the motor that came with the boat gave us a lot of grief. It would die usually when running at idle to dock but some of those docks were in wretched currents. We had the motor serviced a number of times but never with any success. After a number of challenging times of having an unreliable motor while trying to dock a boat that had two small children as occupants, we bought a new outboard. Of course, in time even the newer motors have parts that fail. We had our newer motor “fail” as we headed out from an anchorage on our way further from home dock. At the time we thought we were just needing to top up the fuel tank. Sailors being who they are, and having wind, we hoisted the sails and it was not until we tried to head into a bay and anchor later that day that we realized the problem was something worse than filling the gas tank. By this time we were 40 miles or so from our marina. We spent some character building hours returning home over a few days of storms, being becalmed, lack of power as the motor had not recharged the battery… The worst off was likely the poor dog who waited a long time to get rowed to shore for his needs. There was one evening that had us sailing down wind in a silent, warm, following wind, a memory to cherish for sure. With no motor, our 12 year old son and I took turns “pulling” the sailboat with a line tied to the seat of our dinghy. The dinghy was a double hulled Sabot. We spent one night dodging the course of a ferry, flashlight into the flapping sails to make us visible. That night we anchored in a bay unfortunately open to a massive storm that came right up the arm of the lake towards us. No sleep that night. We did finally get back to our dock, docked under sail with a helpful passerby catching us at the dock. None of us the worse for wear.

In 2005 we purchased a 30 foot Catalina, luxurious compared to the Buccaneer and humourous as our sons were no longer regularly with us on the boat. The Catalina was faster, more maneuverable but that did not remove the challenges. One day we had engine cooling problems, but we had to run the engine to clear down stream through some narrows, an area that also included a ferry (this one a cable ferry). By the time we were clear of the narrows, the engine overheat alarm was screaming. We shut off the engine and sailed. Generally, sailors become pretty good at looking at the weather forecast and deciding if there is a storm on the way. It would be the day of engine problems that we would not predict accurately and would find ourselves in the middle of an awful squall. When the blasts of conflicting wind from a draw hit you and you are suddenly on your side looking down at the water, things can’t get any more  challenging. That day, we got knocked flat twice and I could see David struggling to turn us to correct. The problem was that the direction you would normally turn was the direction of the rocks. I suggested I needed to head forward and drop the main. He reluctantly agreed. As I was dropping the main sail, a problem developed with the genoa. We had changed the sheet lines and tried a new system with a clasp connecting the lines to the sail. The clasp undid, the genoa could not be completely furled and the clew was flapping about. As I held onto the boom to tie the main down, the genoa gave a flap and I took the clasp to the side of the head. No serious damage done. We suggested I go forward and drop anchor to ride out the squall. That worked, anchor held, squall passed, engine cooled and after about an hour we motored slowly to the marina.

Prior to sailing coastal waters I had assumed that lake sailing was less difficult and required less skill. After meeting several people who had done both and disagreed, and after sailing both myself, I no longer think that. There are aspects of both types of sailing that are similar and aspects that are different. I have to admit that the sometimes immediate and constant need to gybe or tack when in more cramped waters helps ready you for what you may need to do on the open waters. I certainly enjoy the long tack of open waters as compared to constant necessity of changing course on more restricted waters.

With an interest in expanding our sailing world we took some sailing courses on ‘the coast’. For many years, sailing offshore was a growing dream. In 2011 we purchased a 1982, 50 foot, custom built sailboat. The boat is cutter rigged and has a large pilothouse. The hydraulic steering has both interior and exterior steering stations. We moved aboard the boat in 2014-15 and readied the boat for offshore adventure. When we announced our intention to sail south to Mexico many people commented they would never be out on a boat and be out of the view of land. We disagreed, distance from shore eliminates a lot of navigation hazards. We sailed the boat south from Victoria, heading offshore to the 100 mile mark. The radar and AIS receiving on our VHF really helped with the journey. The autopilot we added prior to leaving Canada worked flawlessly. We were very happy with the SSB radio and ability to download weather via fax modem and bluetooth to the laptop. We had two additional crew; one to San Francisco and one who remained aboard until Cabo San Lucas. We chose wisely and the crew were amazing.

Boat and crew in San Fransisco

I like to think that the early years of lake sailing added as much to our sailing abilities as did numerous courses on and off the water and many hours of coastal sailing. I also consider myself very fortunate to have experienced this variety of locales for our sailing.

The boat now sits in Guaymas, Mexico, in a boatyard waiting for our return.

Previous Article: The Rind of the Ancient Mariners – Boating with Cheese

I started sailing in 1980 with my husband David and sons Ben and David (then 3 and 1). From 1980 until 2005 we sailed a 24 foot Bayliner Bucaneer. In 2005 we bought a Catalina 30 in Nanaimo, sailed it to Vancouver and had it trucked to Kootenay Lake. We have planned for many years to go offshore and in 2011 finally found the boat we wanted. In 2014 we closed our business in Nelson, relocated to Nanaimo, lived aboard and worked readying our boat for offshore. In October 2018, we left Victoria and headed down the US coast to the Sea of Cortez. After spending summer at home, winter 2019-2020 was spent in Guaymas on the hard. Due to COVID, we drove back to Canada in April 2020. When the Canada/USA border opened to allow entry by vehicle in November 2021, we drove back to Guaymas where we worked throughout the winter on Ricky T. The long time away had only increased the to do list. Back in Canada in May 2022, our plan is to return to the boat in the fall and complete readying for the big splash. Where we go next is somewhat dependent on world climate post pandemic. As French Polynesia is still unsettled due to COVID, we will likely spend at least one more winter in the Sea of Cortez.