Mexico, like Canada, boasts a long coastline: about 7500 km on the Pacific side. It is more than one can explore in a cruising season; it might take a dozen or more to make a dent in it. So, how to prioritize your upcoming cruise to Mexico? We’ll share our impressions collected during the winters of 2015 – 2020 while we cruised Mexico’s Pacific and Gulf of California coastlines, and mention a few particular favourite spots.

First, a few disclaimers. This is certainly not an exhaustive survey (though we were tired at times 🙂 ). We have not seen every location and done all possible activities. Also, our observations are limited to the winter cruising season (roughly November to April). Since our interests focus on hiking, wildlife viewing, scenic landscapes, and underwater life, we judge our anchorages on that basis. We are less excited by activities associated with marinas and large concentrations of cruisers. Your preferences and favourite spots will probably differ, so season our suggestions with your own salt.

We roughly divide the parts of Mexico we’ve seen into three regions: 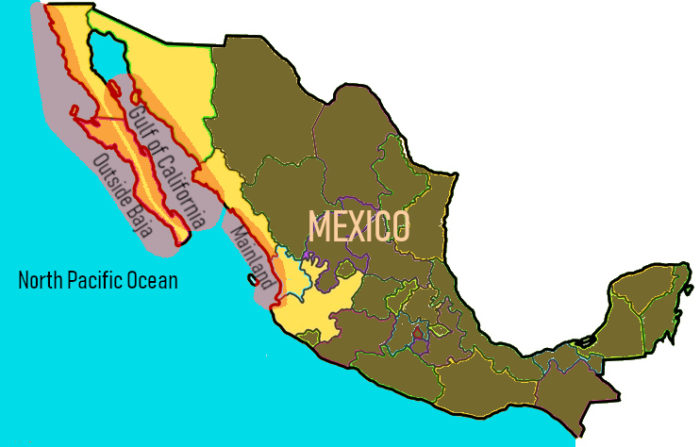 We haven’t been to the extreme north of the Sea, nor south past Banderas Bay.

Let’s start with some broad generalizations before getting into specific locations. Outside Baja is beautiful and sparsely visited. Exposed to the full Pacific waves and wind, it can present challenging sailing conditions. Several cruisers we’ve spoken with have expressed regret that they hurried down around the corner of Cabo San Lucas into the Gulf of California and didn’t spend enough time on the outside Baja. Fortunately, some of the spots you might miss can be visited by leaving the boat in the Sea and striking across land in a car or bus to reach towns on the Pacific side.

The Sea provides great cruising. Generally free from Pacific swell, its waters can still build considerable wind-waves over the 600 miles of fetch. Winter winds align with the main axis of the Sea, and tend to consist of several days of 20 – 30 knot northwest winds (called Nortes), alternating with several days of light or no winds. Southeast winds are rare in the winter. Skies are mostly clear and precipitation is minimal; most of the land surrounding the Sea has a desert climate.

Mainland Mexico south of the Sea is exposed to Pacific swell, which affects many of the anchorages but provides great surfing. There also tends to be farther distances between anchorages along the coast. In compensation, winter water temperatures are warmer than in the Sea: low to mid-20s C as compared to 16 to 20 C. This is one major reason for the popularity amongst snowbirds of places like Puerto Vallarta and Mazatlán.

We found fishing was better along the outside Pacific side than in the Sea – possibly because calmer conditions in the Sea allow for a higher concentration of ‘pangas’ competing for a catch. With the exception of events like the Baja HaHa and Cubar Rally, there are fewer cruisers to rub shoulders with, and the ones you do encounter are generally on the move; folks are less likely to stay in one anchorage for weeks at a time. 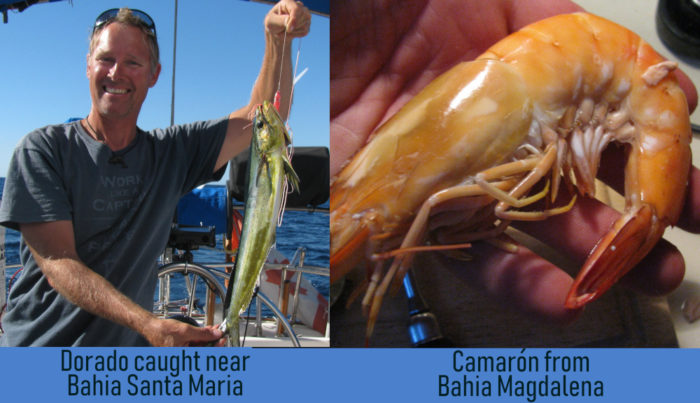 Our two favourite locations on the outside of the Baja were Bahia Santa Maria and Bahia Magdalena. Both featured good anchoring off long beaches, swimmingly-warm water, and plenty of seafood of either the catch-your-own or trade-with-locals kind.

For land exploring, Isla San Martin (north of Bahia de Tortuga – Turtle Bay) had very cool lava tubes that one could clamber into. For wildlife viewing, getting close to Gray Whale mothers and babies is popular January to March in San Ignacio and Bahia Magdalena, though we haven’t yet experienced it.

Gulf of California (the Sea)

Overall, we preferred cruising this area. However, bear in mind that it stretches over 600 miles from the bottom (at Cabo San Lucas) to the top near San Felipe and Puerto Peñasco, so there is a large variety of cruising destinations. With cold winter winds (the Nortes) funneling from the Arizona plains, nigh time temperatures can dip into single-digits, especially in the less populated upper reaches of the Sea. However, the sun still has power to raise daytime temperatures to the mid 20s. Most cruisers stick to the bottom (southern) half of the Sea in winter, and only migrate up to the northern half in the summer. This leaves many of the northern anchorages empty in the winter, and if you like solitude and space, you will find it here.

Animas Slot is in the northern third of the Sea, about 10 miles south of Bahia de Los Angeles

The cooler water is a bit challenging to hop into, but is warmer than most of the ocean around British Columbia, and one can wear a 2 to 4 mm wet suit to ease the chill. The reward is some quite good snorkeling in places. Water visibility varies between 1 and 20 meters, depending on currents and plankton life cycles. In contrast, snorkeling along the mainland coast of Mexico can be more challenging due to swell (which can be uncomfortable to swim in for some folks), and poorer visibility from runoff and populated areas. Our top three Baja snorkeling spots are: Los Gatos, San Juanico, and Los Islotes.

With fewer cruisers and towns in the northern Sea, one tends to see more wildlife, and when you do meet other people, conversations may strike up quicker than in more crowded locations. A disadvantage to the scant population is that if assistance is needed, it may take a while to get the attention of another cruiser or local fisher, and even longer to reach a location with medical and other facilities.

Distances between anchorages are usually less than 50 miles, and often less than 15 miles, so nightime passages can be avoided. Bays and islands are plentiful, but very few anchorages would be considered all-weather. Two exceptions are Puerto Escondido (mid-Sea) and Puerto Don Juan (northern-Sea), both of which are almost landlocked and protect against wind and waves from any direction. Many others are fine in the prevailing Nortes and a few boats remain there for several weeks, but the more marginal anchorages have turnover every few days in sync with the wind patterns.

Sparser population on the Baja means that cell phone coverage is spotty. One generally needs to be near a larger city (e.g. La Paz, Loreto, Santa Rosalia) or near the highway that runs the length of the Baja. In some places we combine hiking with bringing our phone to the top of a hill in order to call home. One can see some great sights while conversing, like whales passing by. Some nice cruising places that lack phone coverage (e.g. Bahia Concepción, Agua Verde) do have small tiendas or restaurants offering WiFi internet via satellite.

If you enjoy exploring towns, then La Paz, Loreto, and Santa Rosalia all have good features to offer. La Paz is well-equipped with the stores and skills to service boats. Loreto is a charming and clean town that has a great selection of Mexican handiwork such as blankets, ceramics, and art. Both La Paz and Loreto are good places to take on / let off visitors, and there are good anchorages nearby to cruise to for one or two week holidays. We enjoyed Santa Rosalia for its well-run Fonatur marina, good restaurants, and the abandoned mine shafts (some with Made-In-Canada mining gear) in the surrounding hills that one can explore.

With so many anchorages to choose from, it’s difficult to list just the top three. Several that we return to over and over again are: Isla San Francisco for its beauty and good hiking; Isla Coronados for its scenic and challenging hiking, neat geology, and proximity to Loreto; and Caleta San Juanico for good snorkeling, and a nearby ranch with burro rides and fresh vegetables. All three of these are away from towns.

Mexico’s coastline south of the Gulf of California has some large towns (e.g. Mazatlán, Puerto Vallarta) great for filling up on fleshpot experiences. Mazatlán, for instance, features the world’s 3rd-largest Carnaval, with fantastic fireworks and a wonderful parade. The smaller towns (e.g. San Blas, Chacala) feel more authentically Mexican as they have a larger percentage of Mexican tourists than in the well-known gringo resort towns.

Travelling south, the climate changes from desert to lush tropical. Consequently fruits and vegetables are widely available in any of the towns. We found ourselves over-stocking on fresh provisions here, after having cruised the Baja for several years and becoming accustomed to having to go several weeks between access to produce (remember, we like the remote places). You’ll also notice different wildlife here: iguanas and crocodiles replace coyotes and roadrunners. Both the temperature and humidity are higher, so you’ll probably sleep without a blanket, but your laundry takes longer to dry.

We acquired the impression that cruisers on Mainland Mexico tend to be less likely to greet and engage one in conversation. This may be due to the larger number of cruisers in Mainland Mexico, or just closer proximity to large population centres. Having said that, in Banderas Bay (La Cruz and Nuevo Vallarta) there is a very active cruisers’ community with plenty of activities both recreational and educational, including talks similar to BCA fleet groups. If you have friends or family wanting to rendezvous with you, there are many places for them to join you and options for staying ashore near the mainland resort towns. The greater number of towns means that cell phone coverage is available in the majority of anchorages.

The wind is more variable in direction near mainland Mexico: rather than alternating NW and calms, it seems more driven by diurnal land/sea breezes and occasional squalls. Some of the southern mainland anchorages are not sheltered from Pacific Ocean swell, so even in quieter wind periods they can be rolly (and can make for interesting dinghy landings!). Cursed swell for one person can be really swell for another – surfing is a very popular activity in places like Punta de Mita. 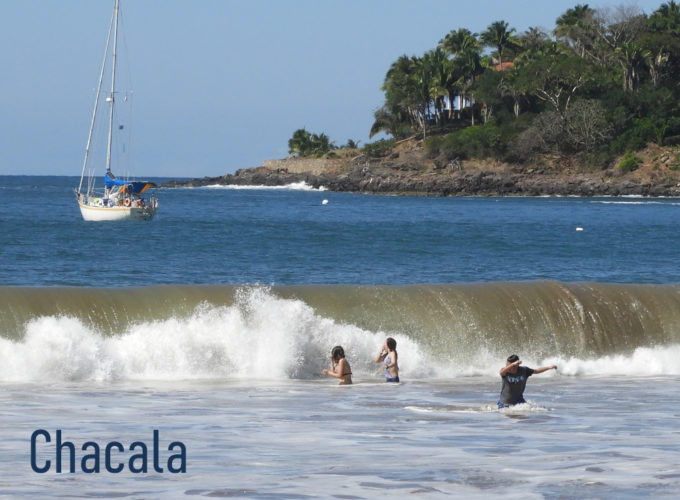 Warmer ocean water is pleasant for swimming in, but generally we found the snorkeling to be inferior to the Baja area due to less visibility and variety of sea life. Other swimming deterrents were crocodiles(!) and panga traffic. One exception was Isla Isabel – a national park about 40 miles NW of San Blas – which is fantastic above and below its clear waters. Three more offshore islands (the Tres Marietas, currently off-limits) may be opening up soon as cruising destinations, and we suspect they will also feature wonderful wildlife.

We haven’t traveled south of Puerto Vallarta, and we hear there are some great spots farther down the coast. Of the places we have seen, we liked Puerto Vallarta, even though one has to stay at a marina. It had crocodiles, a long beach with whimsical statues, people-watching, and good food. We also enjoyed Mazatlán for its clean downtown, attractive architecture, and the Carnaval, plus the fact that one has two anchoring choices close to the action. We observed, however, that most cruisers stayed north of Mazatlán town, in the marinas. Chacala has a fun atmosphere with its cozy-sized beach and lack of gringo tourists.

We hope this summary of our impressions from cruising Mexico is useful for planning your own voyages. Happy dreaming and doing!

Next Article: The Rime of the Ancient Mariner - Revisited

Previous Article: Cameras on Board

From 2004-2006 Barb and Bjarne sailed the South Pacific on Freya, their 30' Hunter-Vogel. Upon returning to Victoria they participated in the VI Watch and supported fleet members preparing to go offshore. After some wonderful local cruising they headed south again in 2015 on Hoku Pa’a, their Niagara 35. Once damage from an unfortunate encounter with Hurricane Newton was repaired, Barb and Bjarne continued their exploration of Mexico. Plans for French Polynesia were revised in response to the global pandemic; they sailed Hoku Pa’a back to Canada via the old clipper route and are looking forward to reconnecting with the beauty of BC.