This rendezvous was not quite as chockablock with activities as some but there did not seem to be a shortfall of entertainment and eating opportunities, whether organized or not.  While I can’t speak to all that people did during the unscheduled time, there was some indication that the liquor store and the Sea Star Estate Vineyard and Winery received a visitor or two.

Each morning gave members a chance to increase their calorie and caffeine consumption in good company.  Saturday’s tasty cinnamon buns were baked by Gord Wolfe from the Vancouver Island Chapter and the Marina provided the Sunday and Monday pastries, fresh fruit, and hot drinks.

The long dry spell of live BCA interactions created a backlog of socializing energy, leading to many animated conversations throughout the weekend, but seemed especially noticeable during the Saturday evening happy hour, which was the first gathering for many just arriving that day.  Many folks ended up with late dinners that night – there was a lot to catch up on!

On Sunday morning, after we’d had our fill of  breakfast treats, Paul Petrie, with the South Pender Island Historical Society, took us back in time to 45oo years ago when there were thriving Indigenous communities on the island known as Sťéyəs in the SENĆOŦEN (Saanich) language.   These were not temporary summer spots but long-standing permanent habitations, which were disrupted by colonization.  Paul’s self-deprecating humour, as he slowly drew his finger across his neck to represent how badly he was murdering the Indigenous language, provided good role-modelling of a willingness to make an effort to speak the original place names.  As a group, we were encouraged to learn more about the history of the Islands that we so enjoy sailing around, even if we do pronounce the original names wrong!  To that end, he recommended the book Saltwater People.  Another resource that readers might be interested in is this Pronunciation Guide to First Nations in British Columbia. 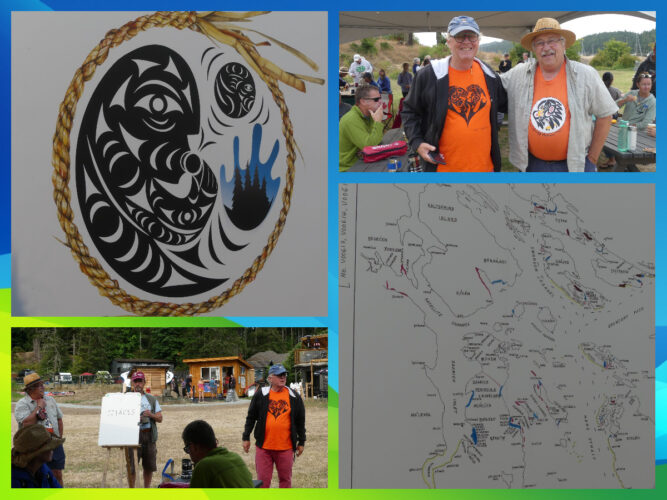 Gathering in rafted dinghies, floating or tied to a mooring ball to enjoy delicious finger food and bevies has become a staple of the BCA August Rendevous. Deemed a COVID-19 safe event, the floating lunch was welcomed by newbies and veterans alike this year! 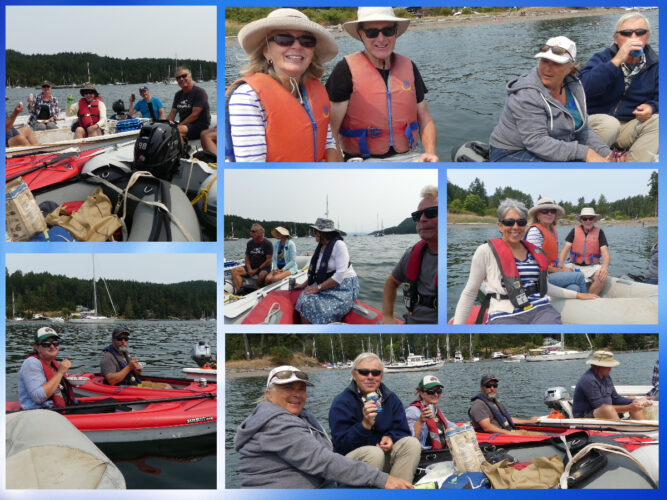 At lunch time, a few dinghies gathered in the bay, tied to a dubious mooring ball, while everyone enjoyed their own food, as well as some scrumptiously delicious plums from Sue and Cliff’s yard (of Catherine J). Everyone was happy to “just be” and catch up with new and old friends.

For those who wanted excitement, 12 boats competed in the blindfolded dinghy race, a.k.a. the “where-the-heck-am-I-going?” and “NO!-your-other-starboard!” race.  The winning team was from Indigo Wave. Cheryl effectively directed Glen around the course in a wooden dinghy which had been souped-up (well, he says modified) by the skilled oarsman.  They were generously rewarded for their efforts with wine and a picnic backpack, courtesy of Calibre Yacht Sales.  Some of the lazier folks expressed regret at their own lack of participation upon learning wine had been on the line!  An honourable mention goes to the impressive team from the inflatable dinghy (a.k.a. rows-like-a-pig) class of vessels.  Eye-witnesses report that excellent communication by Rosario (of Counting Stars) and sheer hard work by Tanya (of Seadra) combined to propel them across the finish line in second place, well ahead of similar lumbering craft. And arriving third was the team of the two eldest youngsters, Victoria and Johnathon of Max and Elizabeth Shaw, live-aboards on Fluenta. So full of youthful exuberance, especially when their youngest, Benjamin, was presented with the prized $20 bill to buy ice cream cones the next day! 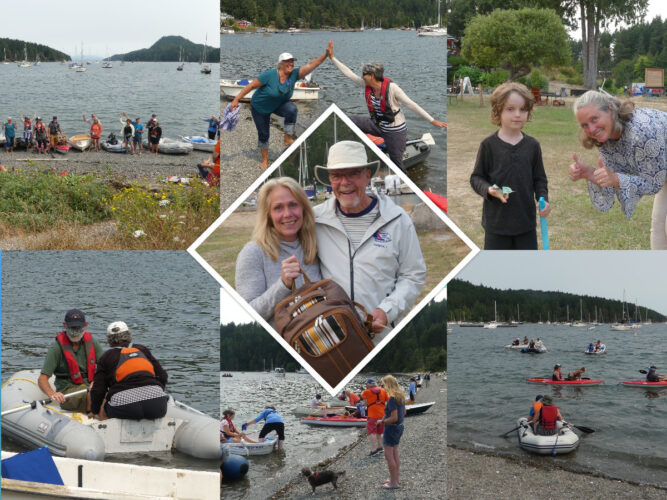 Wanting to appease Neptune and the Wind Gods, Nancy Hancock asked long-time friend, Dick Towson, to be the Master of the Ceremony for the renaming of her vessel, which he did beautifully. All present wished Nancy and the newly anointed Golden Girl fair winds and following seas. 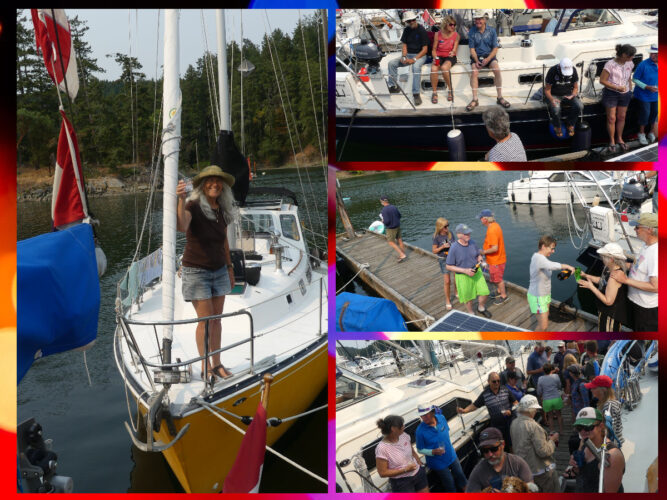 The traditional sharing of food on Sunday evening was modified due to COVID-19 protocols.  Instead, folks were encouraged to bring their own dinners and eat together.  Those who wanted to avoid the complication of keeping their dinner hot chose to eat onboard and join in later for presentations and entertainment.  Many gathered around to sing with musicians Blake Williams (Sea Fever) on the bodhran, Peter McMartin (Cookie Cutter) on guitar, and Daragh Nagle (Chantey V) on mandolin.  Naturally, traditional sea shanties were part of the repertoire, but this year also brought us a new shanty which all agreed with wholeheartedly: “Farewell to COVID-19”.

Dick Towson of Full and By, received his Offshore Skipper’s Award, for his journeys from Mexico to French Polynesia, Hawai’i and then back to Vancouver Island.

Roger Bragg, one of the loyal crew members of Full and By, was presented with his Offshore Crew Award.

It is also worth noting that Dick and crew had a lot of shore-side support from Anne Woodson, who had been unable to join them in the South Pacific when a Covid pox descended upon the world.

Other notable celebrity sightings:  While too recently-returned from their passage for their off-shore awards to be organized, the crew of Seadra (Tanya and Ed) were also at the rendezvous, fresh from their (ridiculous) 2 week quarantine meant to ensure no COVID bugs had survived the 23 day passage from Hawai’i to Vancouver Island.

Two Bon Voyage (a.k.a. leavers’) packages were presented.  While any passage off-shore requires a certain leap of faith, there is no doubt that one has to leap a little farther  in these unpredictable times. Rob and Chris Raymond of Azura Kai, from Vancouver, were set to go last year but COVID put a crimp into those plans.  They were determined they would not be stopped this year, trusting in their ability to adapt to circumstances as needed.

Paul Reshaur of Red Surge, a retired RCMP officer from Vancouver Island, and his dog are also heading off into the great unknown. (I wonder, did their leaver’s package include chew toys?) 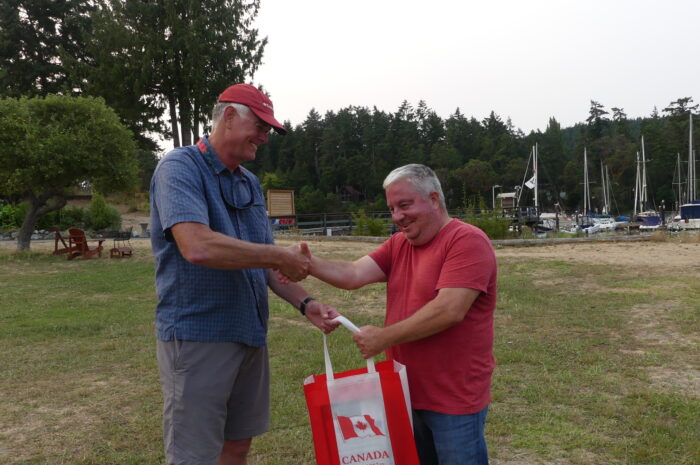 Photos of the event are available at the BCA Shutterfly site.

Next Article: From The Commodore's Desk

From 2004-2006 Barb and Bjarne sailed the South Pacific on Freya, their 30' Hunter-Vogel. Upon returning to Victoria they participated in the VI Watch and supported fleet members preparing to go offshore. After some wonderful local cruising they headed south again in 2015 on Hoku Pa’a, their Niagara 35. Once damage from an unfortunate encounter with Hurricane Newton was repaired, Barb and Bjarne continued their exploration of Mexico. Plans for French Polynesia were revised in response to the global pandemic; they sailed Hoku Pa’a back to Canada via the old clipper route and are looking forward to reconnecting with the beauty of BC.