The French Canals is a series of three articles recounting Morgan and Melanie Finley’s passage from the English Channel through rivers and canals of France to the Mediterranean in July and August of 2020 aboard Swift, their Moody 44 sailboat. With four on board (Morgan, Melanie, Isla (12) and Pippa (9) Finley) their adventures are never boring. In this concluding Part, Morgan, Melanie and crew finish traveling the European canals to arrive in the Mediterranean Sea at Port St. Louis. You can follow them on Instagram @sailing.swift.

We spend the next few days travelling slowly down the remaining 50 km of the Canal entre Champagne et Bourgogne. The countryside continues to be scenic and rural. We get to spend time in tree-lined stretches, tied up in remote stops, most often to blue dolphins. We swim to stay cool. Sometimes there are villages to explore, but all of them are too small for a boulangerie. However, the villages are pretty; they have impressive churches, and are full of the character that comes from centuries of apparently random additions, and from building on narrow streets that never take the most direct path.

Weedy stretches and even shallows continue to plague us. Our raw water strainer needs constant attention, and one morning we burn out the impeller on a stretch of canal. We quickly tie to the railings on the tow path where it passes under a bridge. Fortunately, we carry a spare and can get going again.

Our last few kilometers on the Canal entre Champagne et Bourgogne include encountering several other vessels, including one heading upstream. Should we let them know this is now a road to nowhere? We also pass a “LeBoat” rental, and when we finally turn onto the Soane River, there is another LeBoat waiting at the first lock. We had heard horror stories of the hire boats, partly because there are supposedly no prerequisite skills required to rent them. We wonder if we should turn and run back to the safety of the quiet countryside, except that the beer is running out. It’s still a narrow waterway, and as we pull up behind the LeBoat, we suck our bow rope into our propeller. Instant panic! In less than a minute, I’m in the water with my mask and a knife. The rope cutter on the shaft has already done most of the work and in less than two minutes, the engine is running again with no apparent damage. And here we were looking at a rental boat and fearing their lack of boating skills. The hire boat family look at us like we are crazy. We pretend nothing out of the ordinary happened, and we continue to tootle around waiting for the lock to open.

The Soane River surprises us in a good way. It is beautiful and clean, and the small towns with cobbled streets and massive cathedrals providing welcoming haltes are relatively close together. Our first stop is Auxonne. The mooring is free, and the power and water is 10 euro paid at the tourism office near the cathedral. We generally keep our quick pace down the Soane, but stop when we see somewhere nice. We had heard that the Soane and Rhone would have few suitable stopping places, but the Soane has plenty and many are free.

The temperature soars and we see 39 degrees. We hastily install the fans we bought in the UK. Out of necessity, the river becomes a long narrow swimming pool, both for us and for many of the other vacationers we see camping or picnicking along the riverbank – we even pass cows standing chest deep in the river. When we get to Chalon sur Soane, it is still cooking but at only 36 degrees. We hope we are entering a period of more manageable temperatures. Chalon sur Soane has a welcoming marina with easy access to a big supermarket for re-provisioning. We walk the streets of the old town in the evening, where blocks full of restaurants overflow, turning the streets pedestrian only. All of the restaurants are packed with people. I wish we had known; dinner out would have been great! I’m already feeling nostalgic for the trip, as I reminisce about the planning we did and the excitement we felt while we were still in Canada. I don’t want the good parts to end and I don’t want to miss any potential defining moments. We contemplate staying, but the next day is Sunday when everything closes down so on we go.

We pass through the city of Lyon at lunch time. It impresses more than we had expected. It hurts a bit to pass places like this, where we would have liked to explore, but the Mediterranean beckons. 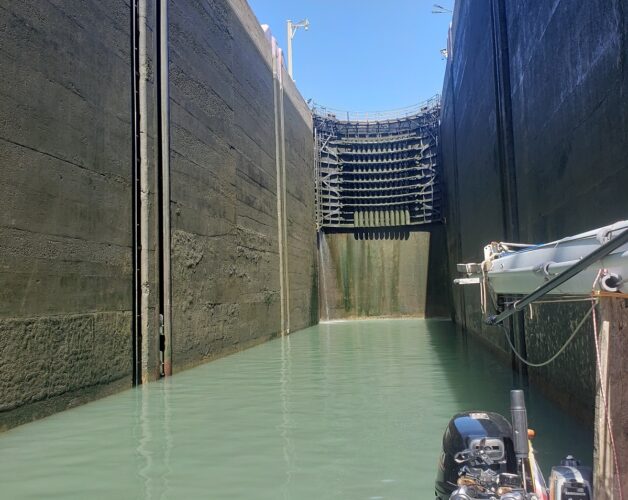 The Soane merges with the Rhone River and the waterway gets wider as we start to pick up some current, going the right way for once. The locks get bigger. We are now entering locks that are up to 200 meters long and much taller. One day we transit the famous Bollene Lock, which we have heard is the tallest in Europe at 22 meters. We go in alone and tie to a floating bollard that follows us down. By the time we are at the bottom, the boat is in a deep canyon and our voices echo. It is also a guillotine lock and we motor out under the massive gate lifted high above us.

The hills along the Rhone are covered in vineyards and crumbling castles, ruins, or keeps, overlooking the valley from cliffs or hilltops every 5 to 10 km. We feel like we are finally getting close to the Mediterranean. The landscape appears more arid. There are cicadas in the trees. We find some free stops on the Rhone, which always makes us happy, including one little halte nautique in the heart of the vineyards, where the local mini-mart carries reasonably priced bottles of Cotes du Rhone from vineyards within 10 km – but we also pick up a box of ice cream for the kids, so everyone is a winner. I look at the bilge and the wine collection. At this rate we’ll have to repaint the waterline!

On August 7, we arrive in the city of Avignon. It is stunning but crowded with tourists. Many places we have visited, including Paris, were relatively uncrowded in the summer of 2020 as travel restrictions and fears surrounding COVID-19 travel kept people away. Not so in Avignon. In the evening, it seems that every outdoor restaurant in Avignon is full. The heat has returned, and it is 36 degrees again. We’ve tied to the town quay. It is baking hot stone and right next to a busy road, but it is free because the bathrooms are not accessible due to COVID. We hear that the cost for a normal year is 70 euro a night! Yikes, looks like we are definitely in the South of France now! 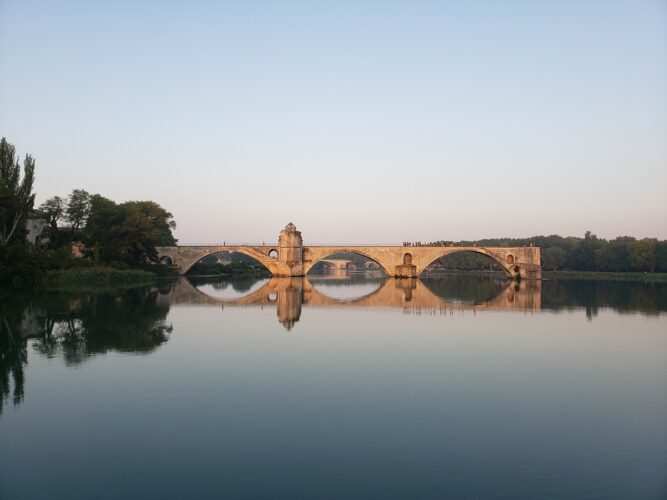 We stay two nights in Avignon. It is not our favourite place to moor, but the town is very interesting and we had a night to spare before the mast was scheduled to go back in. Mel and I go out for a couple of glasses of wine and some entrees. The kids stay on the boat and watch a movie. Our dinner reservation is for 2115h, which is when most of the restaurants are at their busiest. We sit at a small outside table in a cobblestone square by the wall of an old church. Pedestrians stroll past, and all the tables around us are full. We order frogs legs, which I can’t decide if I like or not. There are 5 or 6 pairs of little legs. Mel has decided she doesn’t want to try them after all.  They haven’t grown on me by the last pair, but I eat them all because I’m a cheap cruiser who doesn’t want to waste anything. At least the salad and garlic butter were good. 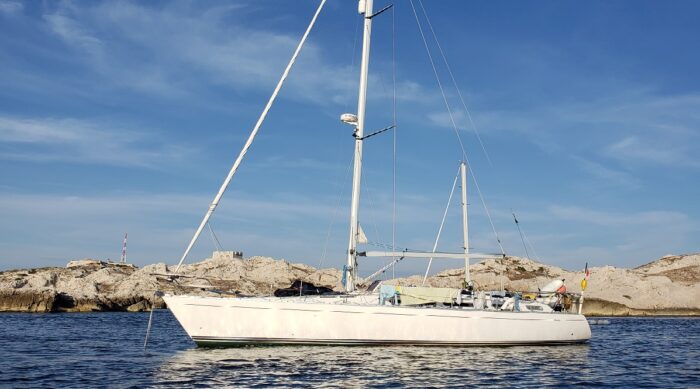 Arriving in the Med

Our route has taken us through 1435 km, 175 locks, several tunnels, and over 345 m of summit level elevation. We’ve spent a month doing the trip, which was barely enough. On Sunday August 9, we go through the last lock and into the town harbour at Port St Louis. The boat tastes saltwater for the first time in a month. We are so excited to be in the Med! Pippa and Isla insist on a big happy hour, with cheese and other treats to celebrate – can’t argue with that! The mast goes in even faster than it came out and without any hiccups, except that it is brutally hot for the two days we are in the marina and we don’t have anywhere to put up shade. But then we are done and we are a sailboat again! We leave on Wednesday morning and sail east for 20 miles to anchor in beautiful clear water in a bay on an island by Marseille… but that will have to be a story for another time!

Next Article: From The Commodore's Desk

Previous Article: The Importance of a Good Solar Controller

Morgan and Melanie along with their crew, Isla (12) and Pippa (9) are traveling the European canals. They bought the boat in the UK and had a slow start with Covid-19 lockdowns. They share pictures on Instagram @sailing.swift and they have a blog which they update from time to time: https://www.sailblogs.com/member/sailingswift/