Back when we bought her, our new-to-us boat had a faint miasma, an unpleasant odour coming from the area near the head.  It wasn’t strong, but was always apparent after the boat had been closed up for a week or more,  especially in warm weather.  Also, and worse, was the very bad smell that wafted through and around the boat whenever the head was flushed after use, as air from the holding tank was displaced and exited via the tank vent. How to address this?  (Other than tightly locking down all hatches before every flushing, or only using the head just before departing crowded anchorages…)

I did a quick check of the hoses with a hot rag, and they seemed OK, so it had to be the tank itself. Although there are alternatives to a holding tank, such as composting toilets,  most are either too expensive or not suitable for our small boat.  I needed something that would work now,  without a major retrofit. My research showed a number of ways to treat holding tanks during periods of use:  aeration, commercial deodorizers, frequent pump-out with a good rinse. I tried a couple of commercial treatments, but they didn’t do much more than mask the smell (and sometimes made it worse!).

I got a tip from a fellow cruiser who had experienced a similar problem.  He solved it by adding aeration into his head system; splicing a small aquarium air pump into one of the tank hoses with a T-fitting. This sounded promising and I started drawing up a design for our system.

But while doing further research on the Internet, I came across a study commissioned in 1977 by Washington State Ferries.  They had received numerous complaints of strong foul odours when the ferries’ very large holding tanks were pumped out and something had to be done.  The final report, titled “A Study of Wastewater Handling, Holding and Disposal from Washington State Ferries”, is a comparison of various treatments: aeration, hydrogen peroxide, and chemical products.  The winner was aeration plumbed directly into the system, but hydrogen peroxide came in second as a close and very effective alternative.

I then remembered a relevant personal experience. Years earlier, my dog had been sprayed by a skunk late at night. In the frantic effort to clean her, after we first tried the classic of tomato juice (did not work, only added another layer of smell) I chanced across the website of chemist Paul Krebaum, which had a recipe for a de-skunk wash of 3% hydrogen peroxide, baking soda and a bit of detergent.  His website includes a full explanation of the chemistry and why it works.  And it does!  So I started digging up some additional references on hydrogen peroxide and how it might help this situation.

Hydrogen peroxide is widely used as a disinfectant and first aid treatment (3% solution), in salons for bleaching hair (35%),  and as a seed sprouting treatment (35%). Higher concentration have various industrial uses including pool and hot tub treatment, rocket fuel,  algaecides, and waste water treatment.  These stronger solutions require great care in handling and can cause blindness, explosions, and serious injury.   But in lower concentrations, such as the 3% solution many pharmacies have in stock, it is safe and readily available.

The substance itself is a compound of two water molecules  (H2O) and one oxygen atom (O) with a  chemical formula of H2O2.  The bond between the water and the single oxygen is weak, so in its pure form hydrogen peroxide quickly breaks down into a single water molecule and a single free oxygen atom. As it does, the oxygen level rises in the containment vessel, like it would with a good aeration system. 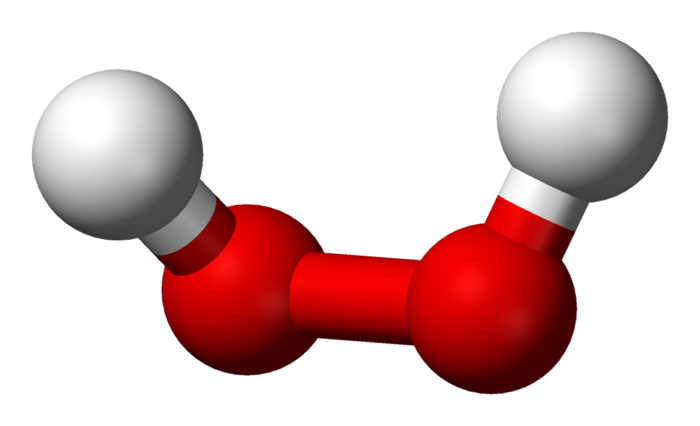 The reason aeration works to suppress those fetid odours is that the holding tank ecosystem consists of both anaerobic and aerobic bacteria:  the anaerobic ones generate sulphurous by-products that smell bad, while aerobic bacteria digest waste without creating the same smelly products.   Introducing extra oxygen into the tank supports the aerobic bacteria while suppressing the anaerobic processes that create the bad smells.  You can do this either by installing aeration or by adding hydrogen peroxide to boost the oxygen level as it decomposes.

The first time I did this, I estimated Saracen had 20 liters waste in her tank so used just under 2 Tbsp, to add about 1 g of H2O2.  The musky odour was gone within 24 hours.

This shock dose of 50mg/litre is used when anaerobic activity is high and smell is present.  The maintenance dose is lower, and only added every week or so when we are actively using the tank.   For example, if we’re out cruising and find ourselves in a situation where we’re unable to pump the tank out regularly (such as the ten days we spent in Glacier Bay),  I would estimate the volume of our weekly ‘addition’ to the tank and use 1/2 the slug dose for that volume.

By using a combination of good tank hygiene and a little bit of H2O2 every now and then, the sweet smell of success is the only tank odour now wafting around our boat (until the head hoses need replacement, which will be an entirely different story!).

I found two references online on that recorded the effect of various concentrations of hydrogen peroxide on different materials.  At concentrations of 10% or less, it is safe for most common holding tank materials, such as stainless steel, ABS plastic and polypropylene.  It is very detrimental for a few materials such as neoprene and nitrile.  And of course, protection against getting into one’s eyes, mouth or on the skin is important.  Make sure there aren’t any materials in your plumbing system that could be adversely affected before using it.

Bottles of 3% hydrogen peroxide are available at many drug stores and are sufficient for this use.  It is possible to buy 35% concentration online, but even more care must be taken when using this to ensure all necessary safety precautions are taken.  The risk is non-trivial – splashed in the eyes it can cause pain and potentially blindness.

Final summary:   Before you try this, make sure you know what materials are in your tank and plumbing system and review and follow all necessary safety measures.   For 50 litres of waste, use ~3-4 Tbsp of 3% H2O2 as a slug dose and use ~1-2 Tbsp of 3% H2O2 as a weekly maintenance dose when tank is in active use.   Adjust the dose volume for the volume of waste in the tank.

Leslie has been sailing with Don for a while now. After meeting him on the water in a kayak taking surfing lessons, they found a common interest in sailing and bought the Martin 32 Saracen. They have been following Plan A the past six years: leave when the boat is ready, sail north, turn around before the fog. So far Plan A has gotten them to Glacier Bay, Haida Gwaii and the mid coast most years.